In November we are going to host a number of events intended to commemorate the 83rd Anniversary of the so-called Kristallnacht. Take a look at the detailed program agendas at our local Branches.

Agenda of the Event:

– Introductory Comments on the Anniversary by Aleksander Rotsztejn

The concert’s audience will have a chance to listen to the poignant songs of the time of holocaust, full of nostalgia and longing for the world whose beauty was destroyed by hatred and contempt

We expect participants to be either vaccinated against COVID-19 or tested negative for COVID-19 not later than 24 hours before the event. 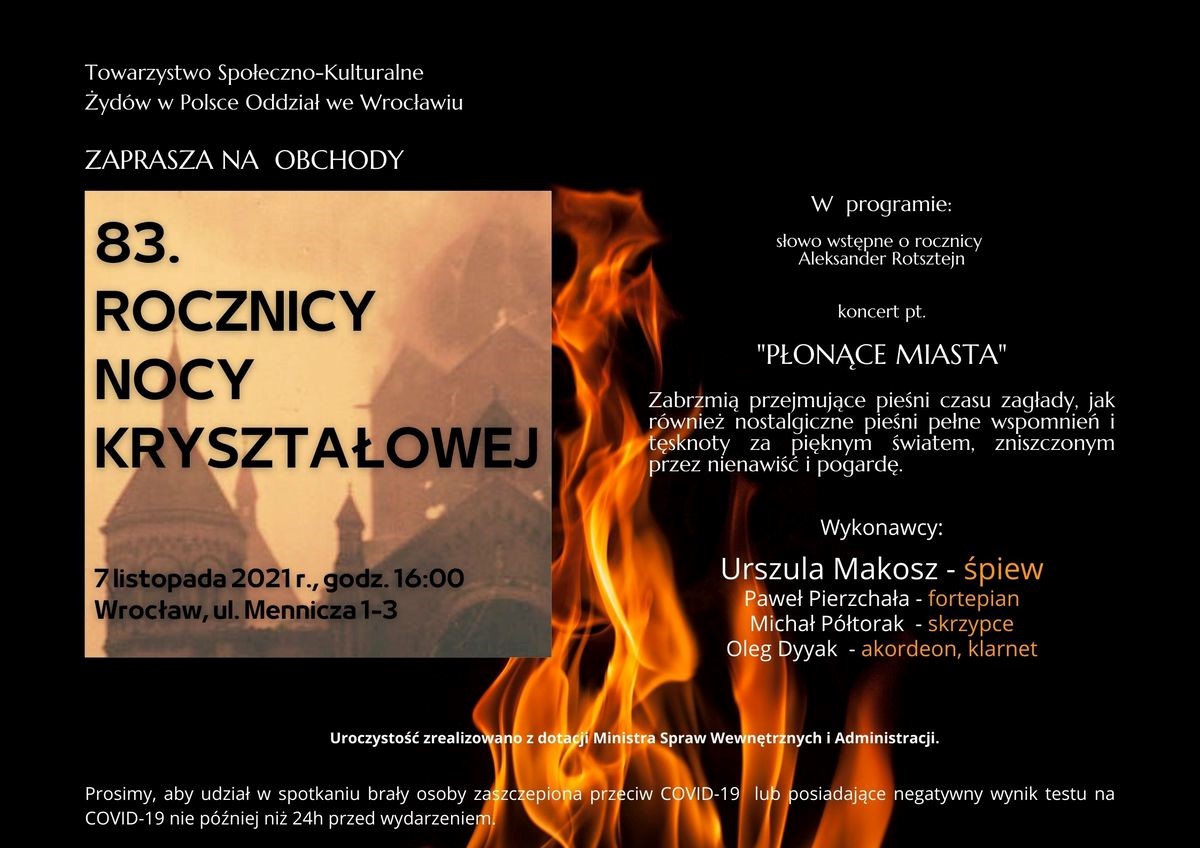 A lecture by Bogdan Twardochleb titled: Szczecin Remembers. On the 83rd Anniversary of the Night of Broken Glass.

The event will be open solely to vaccinated guests, and holders of valid COVID certificates.

The concert titled: Cities on Fire will be also presented to the audience in Warsaw. This time Urszula Makosz will be accompanied by:

Admission is free upon confirmation of your attendance at: komunikacja@tskz.pl 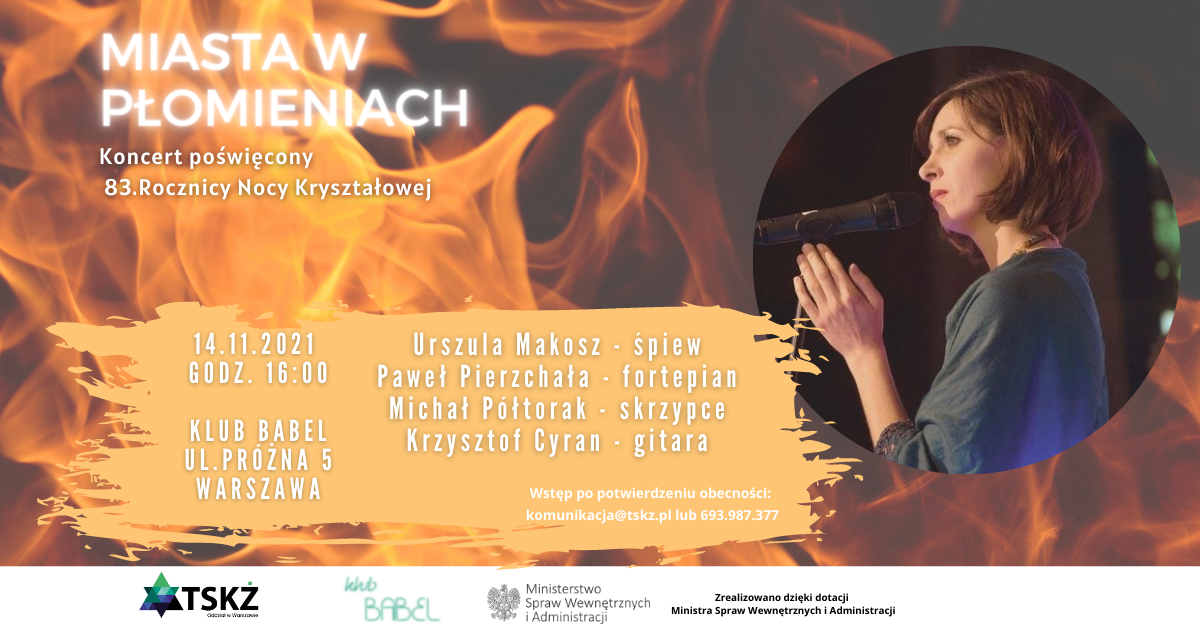 The Elephant – a monodrama play performance by Dariusz Siastacz.

The Elephant is a monodrama play presenting a confession of a man being on death row. The protagonist who has been sentenced to death due to his ethnic origin, recalls his past life which got trapped into the gears of a totalitarian death machine.

The minimalist content and scenography makes guessing the actual theme and setting of the play difficult at the beginning. However, the protagonist gets to the point pretty quickly. Sitting on a bunk bed, he tells his story to the guy on top – with a tongue-in-cheek and sense of humour – which is undoubtedly the main asset of the play. He is disappointed. First there was that trip. The mountains did not impress him, after all they were just “mountains, just like any other ones”. But what strikes him most is that “these days there are no beautiful people anymore”. But who is the main protagonist? He describes himself as an average German. He enjoyed going to cafes (without his wife, of course, as this was somewhat less expensive). He enjoyed watching other people and listening to scraps of their stories. What shattered this almost perfect status quo was the Weimar Republic. At first, he still did not disturb anyone, but later on he started to catch stigmatizing glances of other customers. “They got ugly.” The joy of life was gone. There was anger and political commentaries, and a sense of guilt which eventually made “our’ protagonist grow a trunk and ears. He was no longer a welcomed guest at a coffee shop. He was not  even a passer-by who could be ignored. This is how he felt when surrounded by other people. He eventually turned into the “Elephant”. 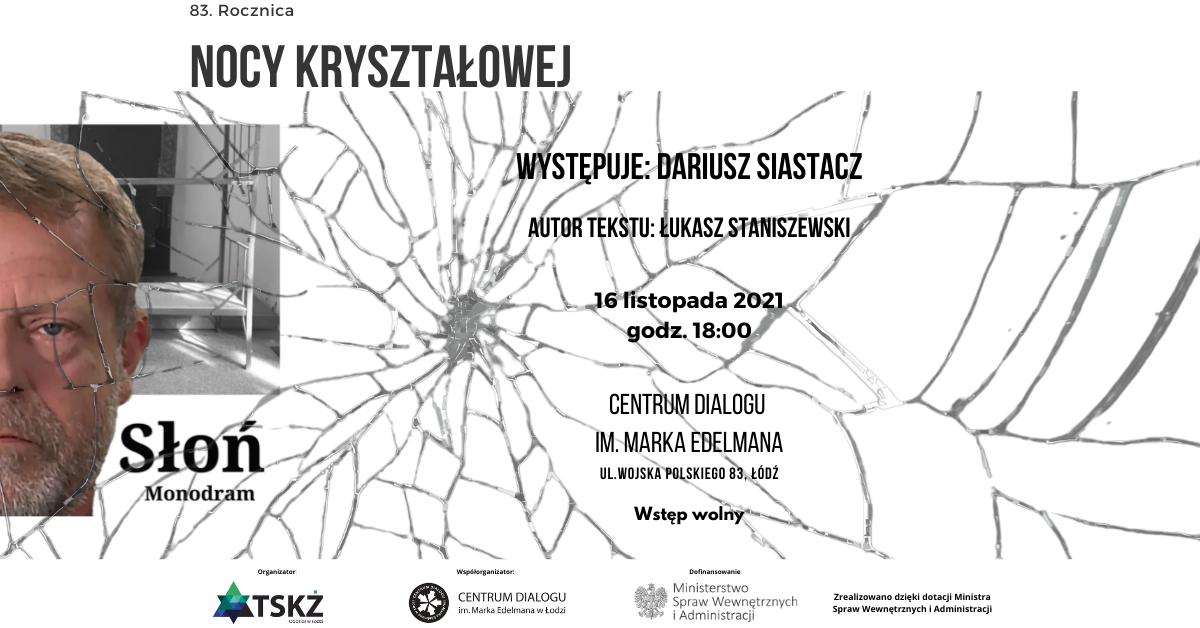