The Warsaw Ghetto Museum and the Social and Cultural Association of Jews in Poland would like to invite you to the official celebration of the 81st Anniversary of Closing of the Warsaw Ghetto’s Borders. The main ceremony of lighting candles at the Ghetto wall will take place on 16th November 2021 at 1:00 p.m. at ul. Sienna 53.

The isolation of the Jewish population introduced by the German occupants was an integral element of anti-Semitic policy of the Third Reich. That is why in spring 1940, they decided to erect in Warsaw – which was at that time regarded as the Jewish capital of Europe – the walls surrounding the so-called Norther District which was inhabited mainly by Jews. The area was soon nicknamed as Seuchensperrgebiet by the German propaganda, which denoted a typhoid-stricken zone. Allegedly, the function of the sixteen-kilometre-long wall was to protect inhabitants of the capital city from epidemics. As a matter of fact, however, it only marked the boundaries of a new urban structure – the city behind the walls – where ca. 450 thousand people were forcibly confined in the very heart of the city. The closing of its borders took place on the night of 15th November 1940.

The Warsaw Ghetto Museum, acting in co-operation with the Social and Cultural Association of Jews in Poland has developed a cycle of events and publications in order to present the reality of the city split overnight into two parts, and the daily lives of its inhabitants.

On the 81st Anniversary of Closing of the Warsaw Ghetto’s Boundaries, Director of the Warsaw Ghetto Museum, Albert Stankowski and Chair of the Social and Cultural Association of Jews in Poland, Artur Hofman, would like to invite you to a ceremony of lighting candles at the Ghetto walls.

Please bear in mind that due to security constraints introduced in connection with the pandemic, the number of participants will be limited. The ceremony will be broadcasted online at: www.1943.pl and via social media of its co-organisers.

Online transmission of the ceremony:

The anniversary celebrations will be accompanied a social campaign “The City Behind the Wall”. Throughout November posters and video clips will remain displayed in public areas and public transport. The campaign is held under the honorary patronage of the Mayor of the City of Warsaw, Rafał Trzaskowski

VIDEO INSTALLATION
“The City Behind the Wall”

A video installation by Karolina fender Noińska // jajkofilm is an art form composed of archival photos showing inhabitants of the Warsaw Ghetto. The people presented in these photos will appear on the façade of Majer Wolanowski’s tenement house at ul. Próżna 14, which was enclosed within the boundaries of the so-called Jewish residential quarter in 1940. The art project is aimed at making the viewers reflect on the history of the Warsaw Ghetto and its residents. The choice of one of the few surviving architectural monuments is also a reminder of the tragic fall of the Warsaw Ghetto’s Uprising when almost the entire district was razed to the ground. In the light of the destruction of almost all evidence of their past existence, the residents of the city behind the wall will remind us of their history during a week-long video installation show.

“The City of the Living / The City of the Dead” is a photographic artwork by Robert Wilczyński. The work consists of 20 boards placed on the fencing of the former Bersohn and Bauman Hospital. The artist, who has combined archival photos of the Ghetto (derived from the collections of the Warsaw Ghetto Museum) with contemporary Warsaw’s snapshots, tries to recollect the city’s heritage which seems to be irretrievably forlorn. In the context of the annihilation of almost the entire Jewish community of Warsaw during World War II and destruction of its cultural heritage, the pre-war world of the past is shown in the photos in an ephemeral form. These images penetrate the contemporary urban fabric like ghosts anchored  within the non-existent city, wishing their stories be remembered. The photographs displayed on the boards are accompanied by selected source texts – passages taken from diaries and memoirs written in the Warsaw Gettto and documenting lives and deaths of its inhabitants in the years 1940-1942.

The exhibition will also be presented online.

The second part of the cyclical project “The Warsaw Ghetto. People, Places and Events” has been devoted to Bersohn and Bauman Children’s Hospital, the seat of the Warsaw Ghetto Museum, and to the doctors who used to work there: Anna Braude-Hellerowa, Teodosia Goliborska-Gołąb, Henryk Makower, Anna Margolis, Adina Blady-Szwajger. We would like to present the history of the institution starting from its foundation in the 1870s until its tragic end in the Ghetto during the Great Deportation to Treblinka death camp. The launching of the second part of the project coincides with the 81st anniversary of the closing of the Warsaw Ghetto, whose celebrations have been partly dedicated by the Museum to representatives of the Ghetto’s health service i.e. all those who, in the face of the inevitable Holocaust, tried to do their best to save human life.

MOVIE SHOW
The Opening of the Silence

The presented film was created as part of a long-term project of the Educational Department of the Warsaw Ghetto Museum, addressed to secondary schools located within the former ghetto area. The project’s objective was to reconstruct the site where the school is now located, using witnesses’ narratives, iconography, as well as archival, scientific and journalistic literature, and personal documentaries. “The Opening the Silence” was created in co-operation with students and teachers of the 17th A. Frycz-Modrzewski Bilingual High School in Warsaw. After presentation of the film and the discussion with its authors, we would like to invite you to a tea/coffee party.

The Mayor of the City of Warsaw 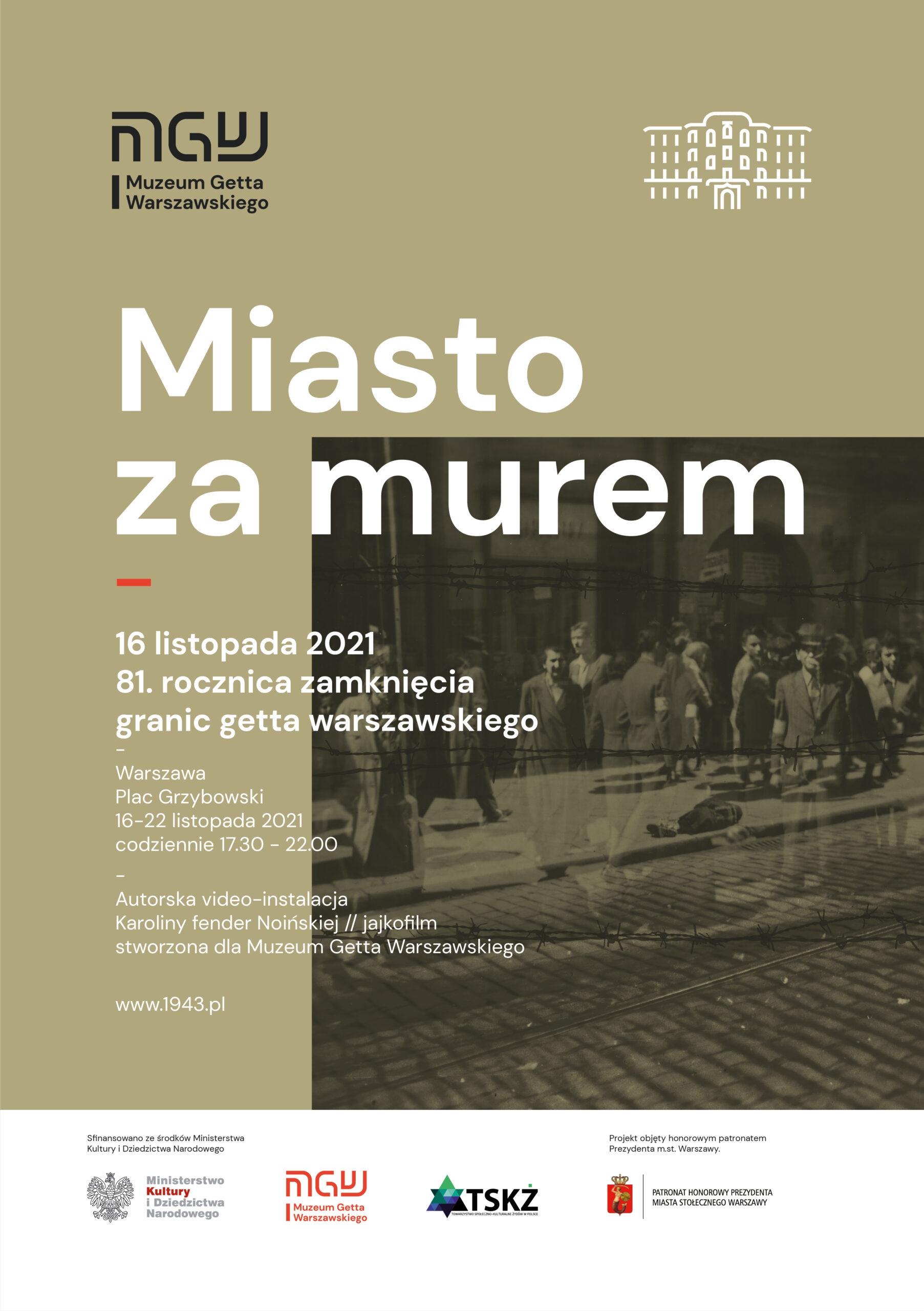