We would like to invite you to the 1st History Festival which will take place from 3rd to 5th June in Lądek-Zdrój. The Social and Cultural Association of Jews in Poland is one of the co-hosts of the event. The Festival is organised on the centenary of the establishment of the Jewish community (Kehilla) and cemetery in Lądek-Zdrój [formerly: Landeck i. Schl.]. Such cemetery has been recently registered one of historical monuments of the Lower Silesia Voivodship.

After World War II, the Lower Silesia became the Promised Land for Jews. However, the smaller the community becomes, the memories dies down too. The Lower Silesia became the home of the largest group of the Holocaust survivors in Poland in the post-war period. Of nearly 100 representatives of the Jewish community who settled down in 40 locations across the region, the majority were the individuals repatriated from the Soviet Union. These topics will be discussed by Tamara Włodarczyk, the author of books about the Jews residing in the Lower Silesia, who will talk to Ignacy Einhorn and Artur Hofman.

The lectures, concerts, debates, films, workshops and exhibitions which are to be held for the first time in a Lower Silesian spa resort, also aim at recalling the figures of the so-called German Jews, including such prominent characters as Sally Lachmann, a balneologist and enthusiast of Lądek-Zdrój or Eva Sandberg, a photographer who has gained worldwide fame thanks to her photos of China.

One of the highlights of the Festival will be a meeting with Martina Fluck, a film director including the screening of her documentary tiled “Mein Traum, meine Liebe, meine Hoffnung” which was partly shot in Lądek-Zdrój, where Eva Sandberg returned after sixty years. It is one of the few sources of knowledge about the former residents of the spa resort and their contemporary life.

The spirit of the event will be full of joy, music and the praise of life. The quartet of the White Stork Synagogue Choir led by Stanisław Rybarczyk will present synagogue songs. Urszula Makosz, a singer from Cracow, accompanied by her band, will sing traditional Jewish tunes in Yiddish, Hebrew and  Judeo-Spanish. Karolina Lizer, a Warsaw-based artist, will meet the audience in Lądek-Zdrój shortly before the premiere concert of the Opole Festival.

The forgotten Jewish world, culture and tradition are part of the identity of today’s inhabitants of the Kłodzko Region. The Festival will start with workshops prepared by POLIN Museum of History of Polish Jews for schoolchildren attending a local school named after Janusz Korczak. Urszula Rybicka representing Żydoteka Foundation, a nominee for POLIN 2021 Award, will deliver a lecture on the connections among the 19th and 20th century Jewish residents of Wrocław and Lądek-Zdrój. Other guests of the Festival will include writers such as Konstanty Gebert, a famous journalist, and author of a cultural and universal roots of genocide and Krzysztof Bielawski, a researcher of the turbulent history of Jewish cemeteries in Poland after 1945.

The organizers of the event would also like to invite you to take a walk around Lądek-Zdrój to follow the footsteps of the resort’s former Jewish residents. All these highlights will be accompanied by the excellent and original Jewish cuisine…

Event Organisers: Lądek-Zdrój Historical and Exploratory Society,  Centre for Culture and Arts in Wrocław – Institution of Culture of the Local Authority of the Lower Silesian Voivodship, Social and Cultural Association of Jews in Poland, Culture and Leisure Centre in Lądek-Zdrój

Detailed Agenda of the Event: 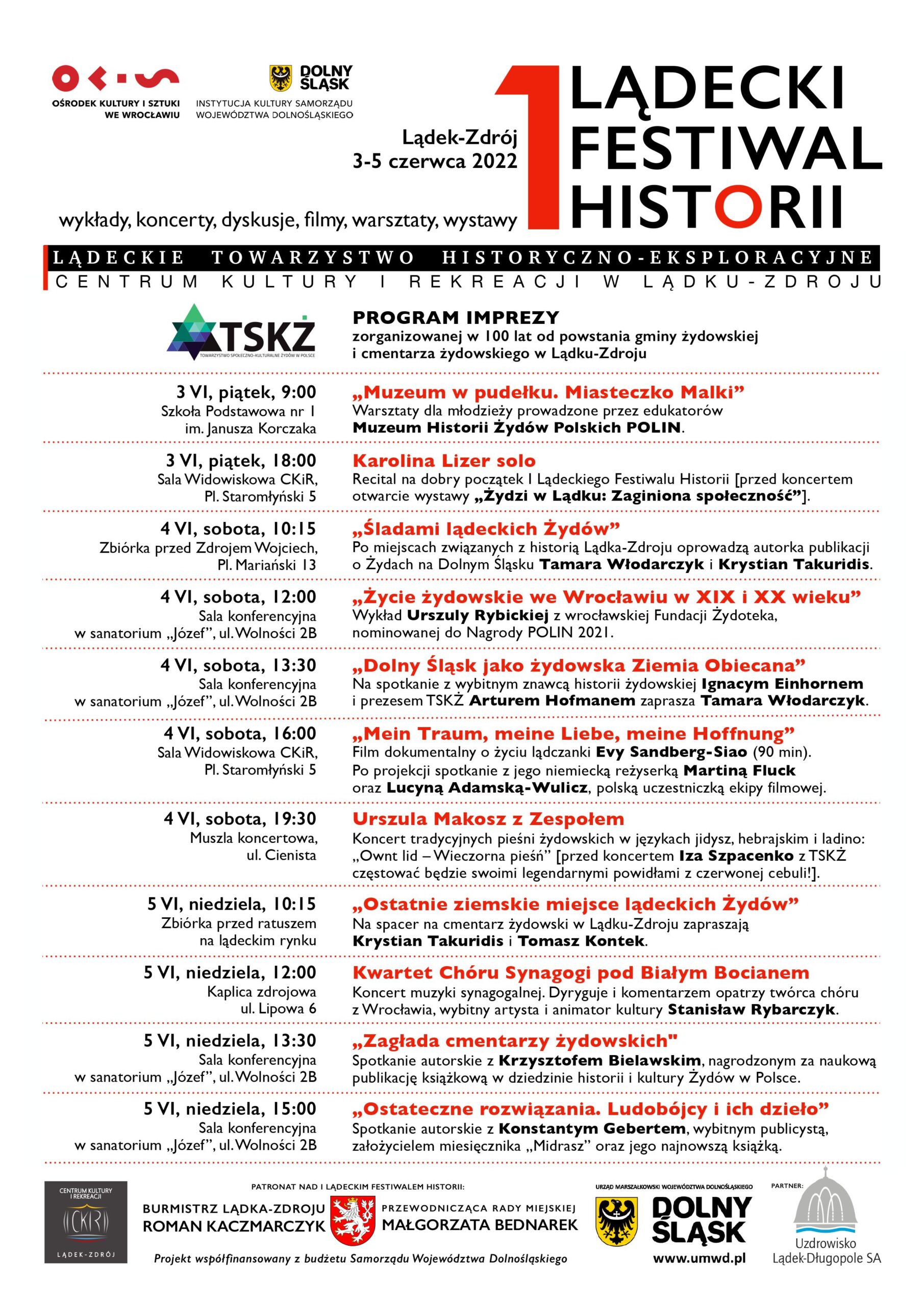