TSKŻ Warsaw has the pleasure to invite you to: Rosh Hashanah Concert “COLOURS OF THE JEWISH MUSIC”

THE COLOURS OF THE JEWISH MUSIC, an evening devoted to the Jewish music, including Hebrew, Sephardic and Yiddish songs is a musical narrative of the Jewish life regardless of the place of birth. We will have a chance to listen to the music accompanying people during their common routines and festive occasions, prayers, love and wedding songs or lullabies. All such songs perfectly epitomise the Jewish spirit…
The vocals will be accompanied by the sounds of one or two guitars. The concert’s repertoire also includes traditional. Rosh Hashanah (i.e. Jewish New Year) music. Although the songs will be performed in their original languages, the singer Anna Riveiro will explain the lyrics to the audience in advance.
“The singer’s warm vocals perfectly match with the excellent guitar play and engage the audience into a highly emotional dialogue.”

Free entrance after prior booking: (e-mail:komunikacja@tskz.pl)

Bookings will be accepted on a first come, first served basis.

Anna Riveiro
As a charismatic singer, cantorial soloist, voice coach, guitar player and music producer, Anna Riveiro is capable of performing in different styles and languages, and her songs are derived from various epochs, traditions and countries. She has been performing both in Poland and abroad, for e.g. in Israel, Mexico, Spain, France, United Kingdom, Germany or Italy. The Jewish music, including, in particular, Sephardic one, plays an important part in her music career. The singer’s repertoire also includes Yiddish and Hebrew music, and liturgical chants. As the first ever Polish female cantor, she performs at the so-called High Holidays (i.e. Rosh Hashanah and Yom Kippur) at the Reform synagogue in Warsaw. Anna has also performed as a cantor in Israel.

Anna Riveiro is a regular performer at international music festivals in Poland and abroad, and her interpretations of Sephardic music have been recognised as exemplary by the UNESCO Endangered Languages Programme.

Michał Pindakiewicz
Michał is a virtuoso classic guitar player with versatile music interests, graduate of the Chopin University of Music and winner of international guitar contests, who has cooperated for e.g. with the Warsaw Philharmonic, National Opera in Warsaw, Polish Radio Orchestra, Buffo Theatre and Roma Theatre. He performed on many national and international stages for e.g. in the Czech Republic, Germany, Spain and Mexico, playing with many classical, jazz and folk bands and musicians. 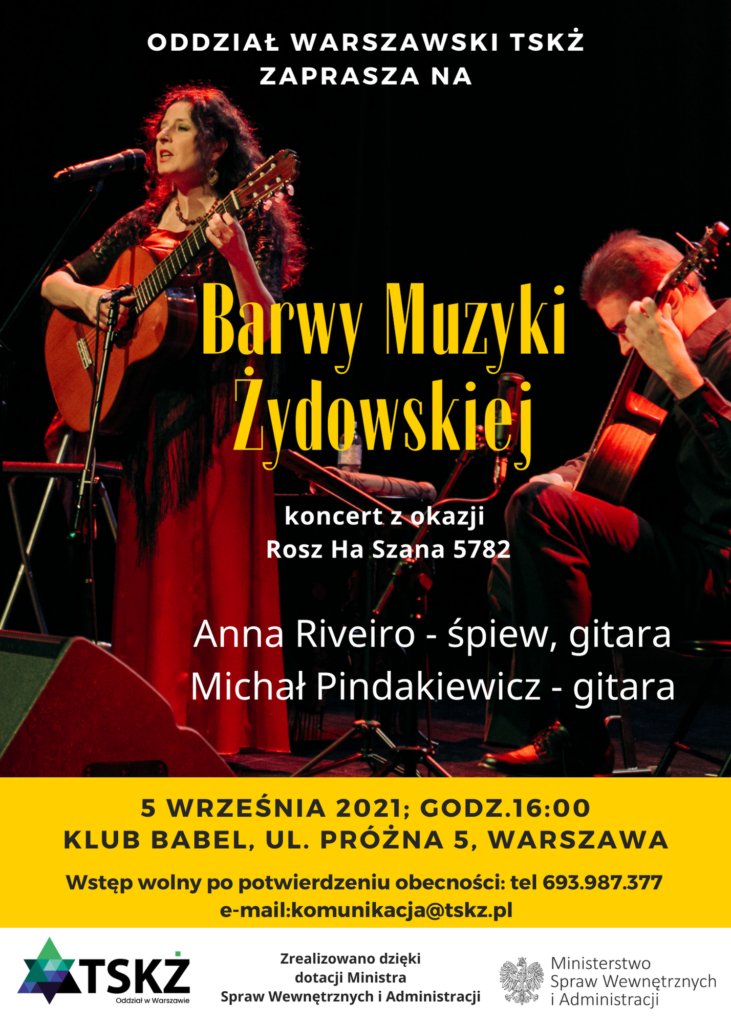