Please be welcome to attend a concert which will take place on 9 October, 5.00 PM at the State Ethnographic Museum in Warsaw (ul. Kredytowa 1). The concert will commemorate the 145th anniversary of birth of Mordechaj Gebirtig, a Yiddish-speaking folk poet and singer, and 80th anniversary of his death.

In their unique project known as “Mordechaj Gebirtig – A Singing Poet from Cracow’s District of Kazimierz”, members of Sentido music band will remind us of the greatest highlights of the exceptional artistic legacy of the Cracow-based signing poet. The performing musicians will try to find new interpretations of his creative output and share them with the audience via their artistic sensitivity, music and lyrics.

Mordechaj Gebirtig was a famous Cracow-based artisan, a talented carpenter and at the same time, an outstanding and popular folk artist. As the last signing poet performing in the Kazimierz District, Mordechaj Gebirtig was one of the major figures representing the Jewish elite of the interwar Cracow.

Gebirtig’s poetry has become an integral part of the Jewish folk song canon and despite the fact that nearly one hundred years have passed since the poet’s death, it is still alive. His works have been explored by many artists and Jewish culture enthusiasts all over the world. Like no one else, M. Gebirtig was capable of reflecting the entire complexity of Jewish culture and social life in the pre-war Poland in his artistic output.

During the concert the audience will have a chance to listen to such pieces as: “Żegnaj mi Krakowie”, “Kinder yorn”, “Abramek złodziejaszek”, “Rejzele” and “Di Saposhkelech” to name just a few, which will be performed in the Polish and Yiddish languages.

The performing band will be Sentido composed of:

Karolina Matuszkiewicz – the violin, the kamancheh, vocals, the suka fiddle

The concert will be preceded by a lecture by Ewa Małkowska Bieniek “Kroke Gebirtiga” [i.e. Gebirtigs’ Cracow]

Free tickets for the concert will be available at Klub Babel (ul. Próżna 5) starting from 26.09.2022 onwards 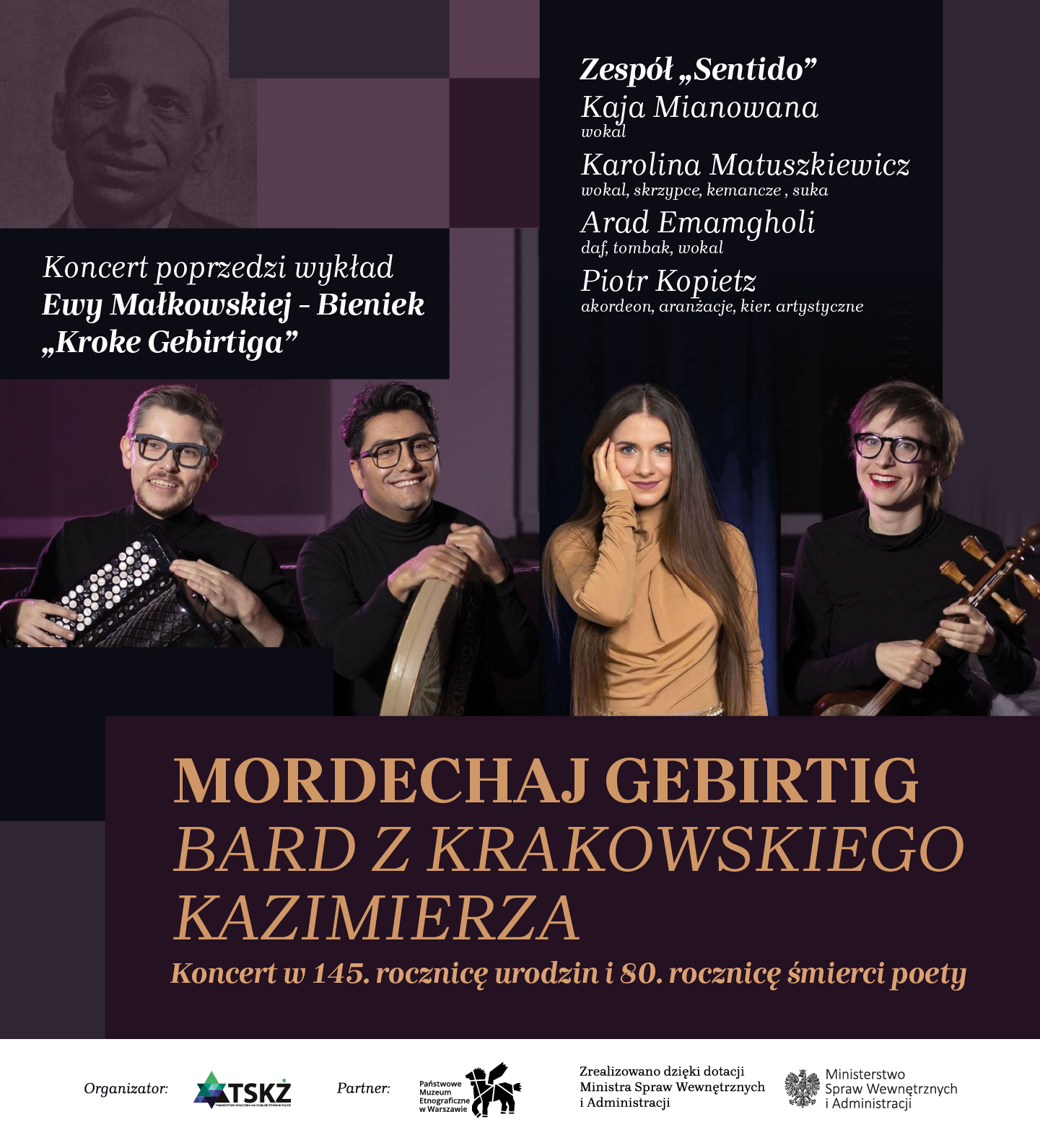 The concert has been organised by: The Social and Cultural Association of Jews in Poland

Our partner: The State Ethnographic Museum in Warsaw

The project has been cofounded by the Ministry of Interior and Administration.