Also this year TSKŻ has been one of the co-hosts of “The March in Memory of 22nd July 1942″. Let’s march together on 22nd July at 6:00 PM to pay tribute to the murdered inhabitants of the Warsaw Ghetto. Our March will start at the Umschlagplatz Monument.

Eighty years have passed since the time when Jewish community of Warsaw was virtually doomed to death – said Monika Krawczyk, Head of the Jewish Historical Institute. In Summer 1942, the Germans deported nearly 3000 thousand Jews to the Treblinka death camp. Feel free to join our annual March in Memory of 22nd July 1942 in order to pay tribute to the murdered inhabitants of the Warsaw Ghetto. This year’s March will be dedicated to the memory of refugees and expats who accounted for one-fourth of all residents of the “closed district”

Eighty years ago the Germans launched the so-called Grossaktion plan in order to deport the Jewish residents of the occupied Warsaw to the Treblinka death camp. The deportations took place from 22nd July till 21st September 1942 at the so-called Umschlagplatz – a loading bay at Stawki Street, where people were forcibly packed into overcrowded trains and sent to gas chambers, and as a result of such deportations, nearly all Jewish inhabitants of Warsaw lost their lives.

By taking part in the annual March in Memory of 22nd July 1942 we will pay tribute to the exterminated residents of Warsaw of the Jewish origin. We will particularly remember all   refugees and expats coming from various towns and cities across the occupied Poland and Europe, who either lost their lives in the Warsaw Ghetto due to hunger and illnesses, or were murdered by the Nazi Germans in Treblinka. – Every fourth resident of the “closed district” had been forcibly displaced from other cities such as Łódź, Płock, Skierniewice, Sierpc, Góra Kalwaria, Piaseczno, or even Berlin and Hamburg. The refugees used to placed at the worst spots across the ghetto, which most often included overcrowded shelters called “sites”, and were the first ones to be deported to the Treblinka death camp. We kindly invite everyone to take part in this special event. Showing the world that we still remember is both our duty and privilege – says Monika Krawczyk, Head of the Jewish Historical Institute.

The March will commence on 22nd July at 6.00 PM at the Umschlagplatz Monument in Warsaw (ul. Stawki 10, near ul. Dzika). The participant will walk along a symbolic route  “from death to life” which will end at  Stare Nalewki (at Ogród Krasińskich) where used to be the very heart of the Jewish district in the pre-war Warsaw. The March will be followed by Michał Pepol’s concert titled “We Are Standing at the Ghetto Walls with our Arms Down”. The special guest star will be Sława Przybylska, a legendary Polish singer. Just like every year, the participants will carry symbolic Awareness Ribbons featuring the names of Jewish expats and refugees, which will become part of the display. Additionally, an open air exhibition designed by Jan Strumiłło and commemorating the victims and will be opened to visitors at Stare Nalewki until 1st September. Apart from the art installations we have planned a series of side events. More details will be available soon at: www.jhi.pl.

Host of the Event: The Emmanuel Ringelblum Jewish Historical Institute

At the beginning of the Event, the voluntary workers will distribute Awareness Ribbons with people’s names.

Reinhardt Operation. The 80th Anniversary of the Holocaust in Poland

The year 2022 marks the 80th anniversary of the launching of the so-called Reinhardt Operation – the planned extermination of the Polish Jews which was scheduled and carried out by the Nazi Germans. From March 1942 till November 1943, the Nazi Germans murdered nearly 2 million of Jews in the General Governorate, Białystok District and other European countries such as Bohemia and Moravia, Slovakia, Greece, Macedonia, Germany and Austria.

The major extermination centres were the death camps in Bełżec, Sobibór, Treblinka and Majdanek – where gas chambers were used. Thousands of Jews were also shot dead in the streets of ghettos, or died during transportation due to the lack of water and air. As a result of the Reinhardt Operation, the majority of Jewish communities in the occupied Poland ceased to exist. 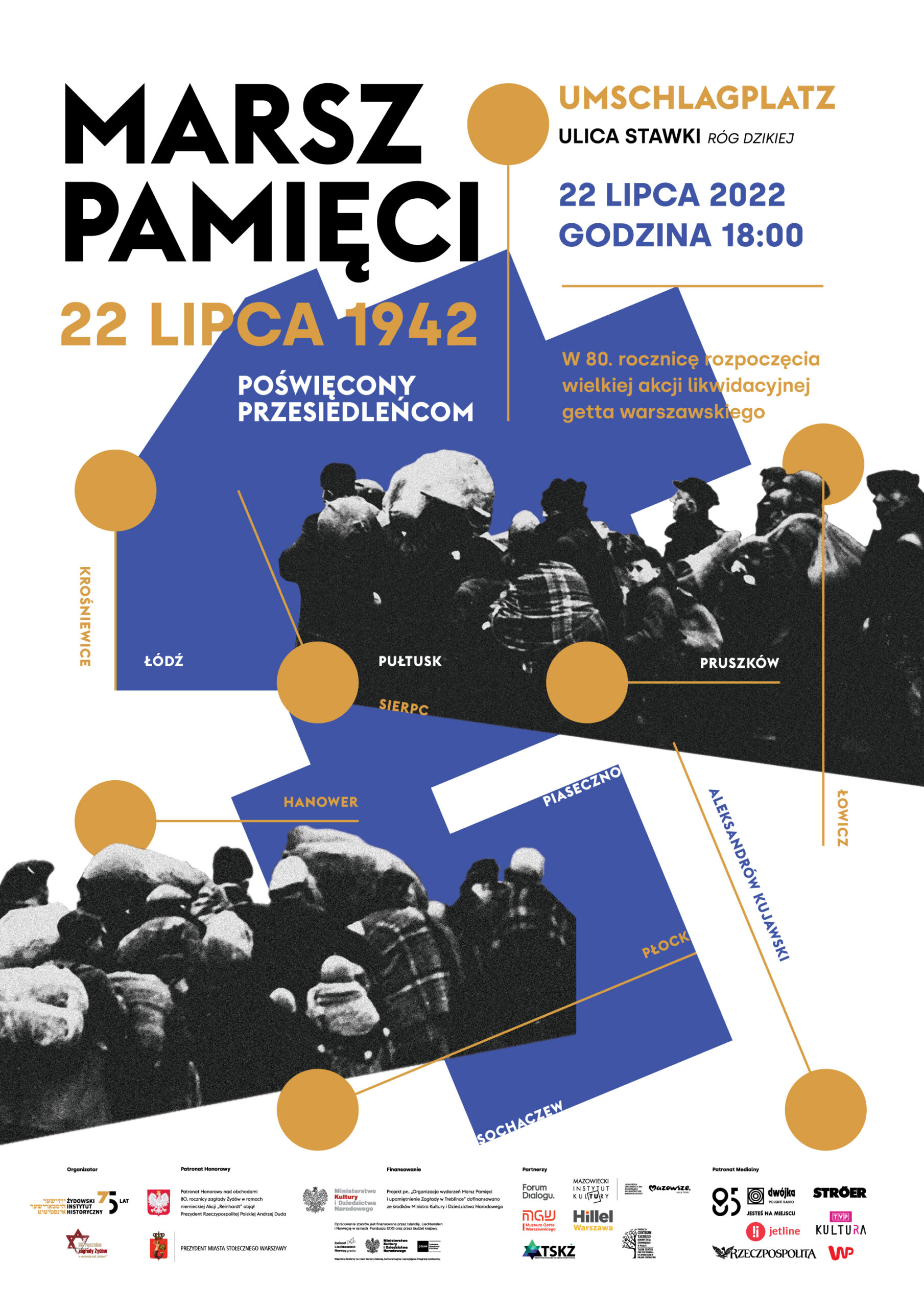