It is going to be the 13th edition of the DAYS OF REMEMBRANCE held in Lodz. The International Holocaust Remembrance Day, an event which was established by the UN eighteen years ago, will be celebrated on 27th – 30th January 2023. On these four consecutive days, thanks to the cooperation of the Social and Cultural Association of Jews in Poland, Stefan Jaracz Theatre in Lodz and the Marshal’s Office in Lodz, a number of concerts, theatrical performances and Q&A sessions will be hosted as part of the event. 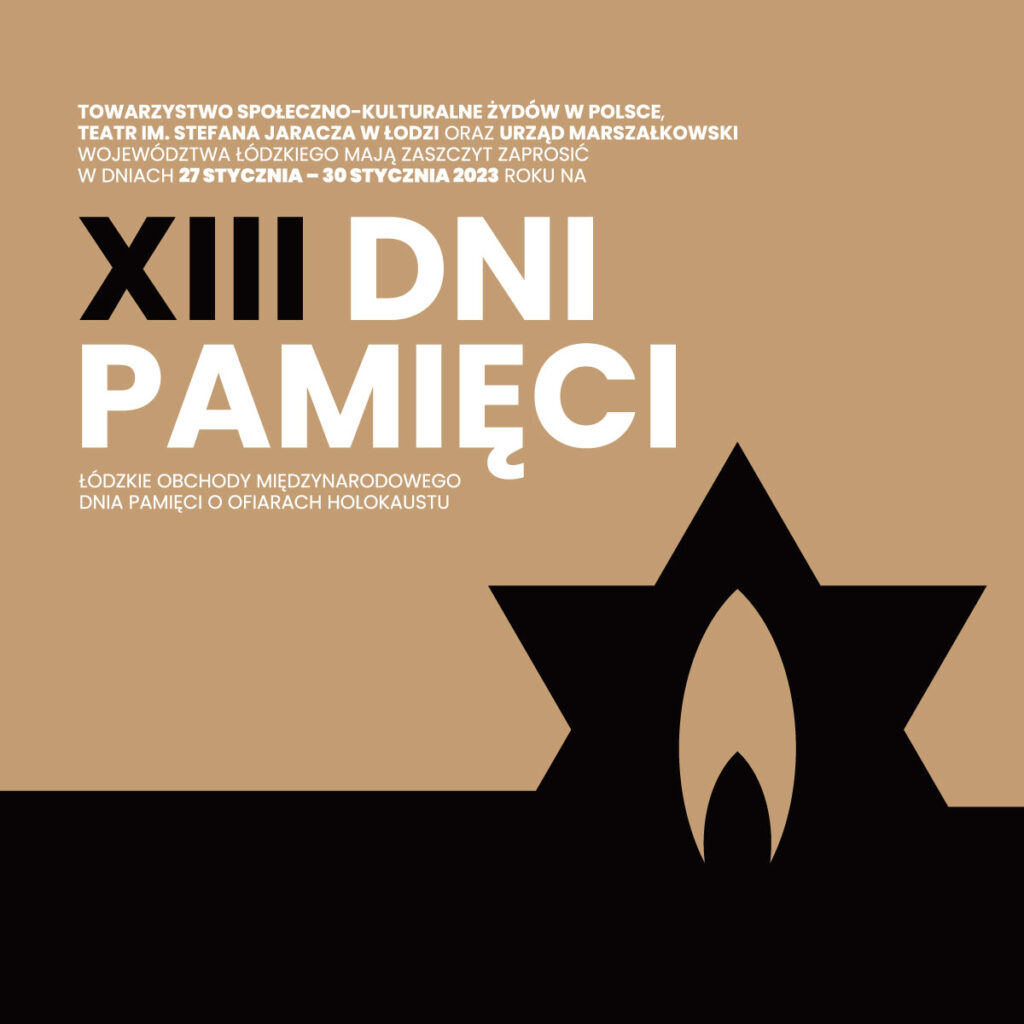 On 27th January, many events are held all around the world in order to commemorate the victims of the Holocaust. The Social and Cultural Association of Jews in Poland has been recalling the history of the Holocaust and nurtured the memory of the victims of the Holocaust since the post-war period when Jewish themes were neither trendy, nor popular. This year’s edition of the event is really unique, as in its background, a savage war is raging, right next door, in the neighbouring Ukraine. Many years ago we added Lodz to the list of cities commemorating the International Holocaust Remembrance Day. Once again, we are making an attempt, in partnership with the Stefan Jaracz Theatre and the Marshal’s Office, to commemorate the tragic fate of the Jews of who became victims of the Second World War. This is very relevant nowadays, when we should make future generations aware of what mindless hatred can bring about. We must do whatever we can to educate young people and help them avoid mistakes which, apparently, can be easily repeated. I have been focusing on this aspect every year, because the witnesses of those events and of the Holocaust period are fewer and fewer among us. – reminds us Artur Hofman, Chair of TSKŻ.

This year will be the thirteenth year in a row when the DAYS OF REMEMBRANCE will be held in Lodz, giving everyone a great opportunity to experience the culture and history of Polish Jews within the premises of Stefan Jaracz Theatre, Marek Edelman Dialogue Centre, Museum of Independence Traditions and Museum of the City of Lodz. The hosts of the event, along with their eminent partners, bearing in mind the great interest in its previous editions, have prepared numerous attractions such as lectures, concerts and interesting meetings.

This year’s celebrations will commence on 27th January at 12.00 noon at Radegast Station (which is a branch of the Museum of Independence Traditions) where a flower ceremony will be held at the memorial. Then, at 6:00 pm, an opening concert will take place at the Stefan Jaracz Theatre. The concert titled “Hemar ODnowa” [i.e. Hemar the Renewal] is an original project developed by the Museum of the Second World War in Gdansk based on Krystian Iwanow’s script. It premiered on 6th April 2021 to commemorate Marian Hemar’s 120th birthday. The event’s title [i.e. Renewal] alludes not only to the presentation of the artist’s work in brand new and special settings, but also to the involvement of artists representing the younger generation: starting from the arrangers of the music, to the composers of some of the pieces and performing artists, to the conductor. Many excellent artists, soloists and musicians will appear on stage. We will have an opportunity to admire a forty-strong music band which will enable us to experience a brand new interpretation of Marian Hemar’s artistic output.

On the next day i.e. Saturday, 28th January, at Obiecana Café a Q&A session will be hosted with Anna Dobrowolska, the writer of the book: “Byłem fotografem w Auschwitz – prawdziwa historia Wilhelma Brassego” [I was a photographer in Auschwitz – the true story of Wilhelm Brasse]. On the same day, Slawomir Holland will perform ‘Nic nowego pod słońcem’ [Nothing New Under the Sun] on the Chamber Scene of the Stefan Jaracz Theatre in Lodz.

On 29th January, all events will take place at Marek Edelman Centre for Dialogue in Lodz. A meeting titled PRZED ZAGŁADĄ. Kobiety w kręgu awangardy [BEFORE THE HOLOCAUST. Women in the avant-garde] attended by outstanding guests such as Dariusz Dekiert, Irmina Michalak and Krystyna Radziszewska  will be held 4.00 PM. The guests will discuss the book “Tańczymy zaczarowani taniec młodości” [As if enchanted, we perform the dance of youth]. At 6 PM on the same day, Agnieszka Babicz’s monodrama entitled “WIERA” will be staged at the Dialogue Centre. The theme of the play is the life story and songs from the repertoire of Vera Gran: a great but rather forgotten Polish singer of Jewish origin, a cabaret and film actress, who used to sing in the Warsaw Ghetto during the war, and was subsequently accused of the collaboration with the Nazis, hence becoming a victim of hate speech.

The grand finale of the 13th edition of THE DAYS OF REMEMBRANCE will take place on 30th January at 6 PM at the Stefan Jaracz Theatre in Lodz. The highlight of the event will be the concert performed by the band “Sentido” made up of: Kaja Mianowana – vocals, Karolina Matuszkiewicz – the violin, the kamancheh, vocals, the suka fiddle, Arad Emamgholi – the daf, the tombak, vocals, Piotr Kopietz – the accordion, arrangements, creative direction.

In their unique project known as “Mordechaj Gebirtig – A Singing Poet from Cracow’s District of Kazimierz” members of “Sentido” will remind us of the greatest highlights of the exceptional artistic legacy of the Cracow-based singing poet. The musicians develop new interpretation of Gebirtig’s creative output and share them with the audience via their musical sensitivity and lyrics. Mordechaj Gebirtig was an ordinary Cracow-based carpenter, and, at the same time, an outstanding and popular folk artist. He was the last Jewish singing poet performing in the Kazimierz District, and one of the most famous representatives of the Jewish elite of the interwar Cracow. Gebirtig’s poetry is nowadays regarded as an integral part of the Jewish folk song canon, and despite the fact that more than 80 years have passed since the poet’s death, it is still very popular. His works have inspired many artists and Jewish culture enthusiasts all over the world. Like no one else, M. Gebirtig was capable of reflecting in his artistic output the entire complexity of Jewish culture and social life in the pre-war Poland.

Admission to all events is free. Free tickets to concerts and the play titled “Nic nowego pod Słońcem” will be available exclusively at the Theatre’s box office starting from 20th January 2023. Registration for the performance “WIERA” will be carried out by the Mark Edelman Centre for Dialogue in Lodz. For more detailed information please see: www.tskz.pl or www.teatr-jaracza.lodz.pl

The hosts of the event have decided to continue an educational project known as the Special Educational Package of the DAYS OF REMEMBRANCE, which is targeted at schools and organised groups. As part of the Package, young people will be able to take part in workshops offered by the Warsaw Ghetto Museum and the Marek Edelman Dialogue Centre in Lodz. The events also include theatrical performances. “The Righteous” staged by Artur Hofman, is a drama and music show dedicated to the Righteous Among the Nations, created on the initiative of the Institute of National Remembrance, in cooperation with the Social and Cultural Association of Jews in Poland. The event hosts have not forgotten about the youngest visitors and have prepared for them the performance “Dlaczego i kot i pies się kłócą” [Why the Cat and the Dog Quarrel] by the (OD) Nowa Theatre, directed by Katarzyna Post. For more detailed information about the Package, please see: www.tskz.pl and www.teatr-jaracza.lodz.pl. In order to take part in the Package, please book a free ticket.

For the last twelve years, around the end of January, the hosts of the DAY OF REMEMBRANCE have been taking efforts to offer the residents of Lodz many extraordinary lectures, exhibitions, films, plays and concerts to nurture the memory of our common past, recall the victims of the war, and recollect the world which no longer exists but whose memories are just longing to be uncovered… at every turn.