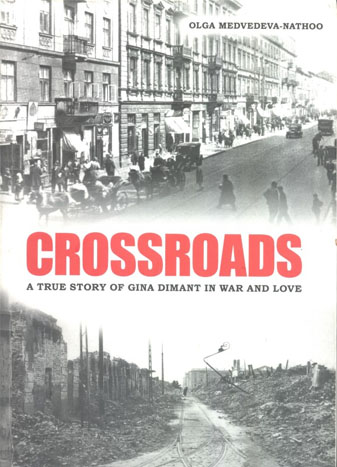 The idea of the translation of: Crossroads. True Story of Gina Dimant in War and Love, a book by Olga Medvedevya-Nathoo came from the authorities of TSKŻ Szczecin. Click the link below to download the Polish version of the book.

The book has been based on Gina Dimant’s memoirs. Gina was born in Poland in 1926. She lived at the intersection of historical and geographical roads, and on the border of different cultures and languages. Her story was marked by a series of milestones such as the Second World War, her escape, deportation, repatriation, emigration, etc. The protagonist’s narratives about the “crossroads” she had to pass are the story’s backbone. And even though the story is composed of a series of interviews, it is devoid of exchanges of questions and answers between the author and the protagonist that are typical of the genre. The life at the crossroads is reflected by the unique structure of the book, where personal or intimate experience of the character, such as falling in love, is intertwined with documented historical events, and the protagonist’s memoirs are smoothly transformed into a work of literature.

The book has been already published in the Russian and English languages, and has been translated into Polish by Ludmiła Kopycińska.

The costs of translation were subsidised by the Municipality of Szczecin.