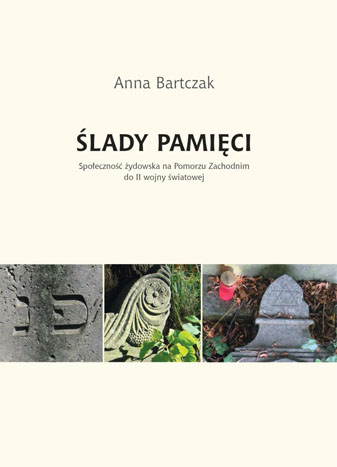 Download a free e-book The Traces of Memory. The Jewish Community of the West Pomerania before the Second World War, authored by Anna Bartczak, PhD. The work was published at the initiative of TSKŻ Szczecin, and thanks to the financial support of the Marshall’s Office of the West Pomeranian Voivodship.

This e-book would not have been published, at least this year, if there were not for the COVID-19 pandemic which just made us change our original plans related to the project: Let’s Save our Memory – The Jewish Community of the West Pomerania until the end of the Second World War. The project has been intended as a follow-up and extension of another initiative implemented in 2019 i.e. Recalling the Memory – Jewish Cemeteries in the West Pomerania  which included three study tours organised from 15 September to 10 October 2019 whose participants had an opportunity to see few preserved Jewish cemeteries which sometimes served as the only reminders of the Jewish residents who had been exterminated by the Nazis. The tour participants visited cemeteries in Gartz, Schwedt, Moryń, Banie, Suchań, Mirosławiec, Drawsko Pomorskie, Świdwin, Cedynia, Boleszkowice, Mieszkowice, Chojna and Widuchowa, and the Jewish Cemetery at Gorkiego Street in Szczecin, which was visited on 27 October. The tour around Szczecin was supplemented by a series of lectures delivered by Anna Bartczak, PhD, devoted to the Jewish community and history of visited cemeteries. At the same time, Michał and Paweł Kulik shot their film titled Recalling the Memory – Jewish Cemeteries in the West Pomerania whose premiere show took place on 26 November 2019 at the Castle Cinema at the Pomeranian Dukes’ Castle in Szczecin.

The project which the Social and Cultural Association of Jews in Poland hoped to implement in 2020 included five meetings with the residents of Cedynia, Dębno, Świdwin, Szczecinek and Trzebiatów and a series of lectures devoted to the Jewish community of the West Pomerania, taking into account, in particular, residents of the aforementioned venues, as well as documentary film shows, meetings with filmmakers and debates. At the same time, local residents were invited to take part in a photo contest devoted to ‘Jewish Traces in Our Town’. To facilitate the project completion, we have started cooperation with a number of local cultural institutions. Unfortunately, as a result of restrictions introduced in connection with COVID-19 pandemic, we only managed to organise meetings at the Regional Museum of Cedynia and the Świdwin Cultural Centre. The remaining institutions i.e. Municipal Library in Dębno and Trzebiatów Cultural Centre were forced to withdraw from the project. In those circumstances, we concluded that the our region would suffer a great loss if we failed to use the materials prepared by Anna Bartczak, PhD so we suggested publishing the work which would include pictures taken during the study tours and selected photos made by the contest participants.

At this point I would like to express my deep gratitude to the members the Social Cooperation Department at the Marshall’s Office of the West Pomeranian Voivodship including, in particular, Justyna Jakubowicz-Dziduch and Marek Karapuda, for their invaluable support and assistance essential for the successful publication of the work.

From the Foreword by Róża Król – Chair of TSKŻ Szczecin