To celebrate the Year of Maria Konopnicka, Teatr Otwarty in Gdańsk will be hosting a series of free concerts under a common title: “Nie rzucim ziemi skąd nasz ród” [We Shall Not Abandon the Land From Whence We Came]. The five concerts will feature old songs which used to be popular at Polish households, and which accompanied the Poles during major historical events and which have eventually become crucial national symbols, mementos of the past or a moving testimony of specific historical periods.

Alongside the patriotic songs, the concerts’ programme will also include the works of two major Polish composers of the era of Romanticism i.e. Frédéric Chopin and Stanisław Moniuszko.

Apart from Chopin and Moniuszko, the concert audience will also get a chance to listen to the works by other Polish composers representing the late Romanticism, such as Zygmunt Noskowski, Stanisław Niewiadomski, and Feliks Nowowiejski who composed their musical accompaniments to Maria Konopnicka’s poetry.

Some of the concerts will be accompanied by the poetry written by the most outstanding Romantic poets i.e. Adam Mickiewicz, Juliusz Słowacki, Cyprian Kamil Norwid and Kornel Ujejski who used to be frequently referred to as “the last great poet of Romanticism”.

The project will also include some lectures devoted to the role of Dąbrowski’s Mazurka in the Polish national tradition, or heroic attitudes of Jews who fought for the independent Poland. One of such Jewish heroes was Władysław Rawicz (we have just celebrated his 190th birthday anniversary) – a civil commander of the Podlasie Region who took part in the January Uprising.

The hosts of the event which commemorated the Year of Maria Konopnicka try to emphasise the fact that the poet and writer, just like many other leading representatives of the Polish positivist literature, insisted that the Poles should open up to the Jewish community, make them part of the Polish society and offer them the same rights as the ones enjoyed by Polish citizens, and disallow antisemitism.

Programme of the Concert:
19th and 20th century songs based on poems by Maria Konopnicka, popular patriotic songs and M. Konopnicka’s poems

“Good Morning” – Midday Concert for Children and their Parents

The programme includes:
anthems, hymns and poems of tribute

The programme includes:
songs and piano pieces composed by Frederic Chopin, songs and arias by Stanisław Moniuszko and romantic poems devoted to the love of the homeland (by A. Mickiewicz, J. Słowacki, C. K. Norwid, K. Ujejski) 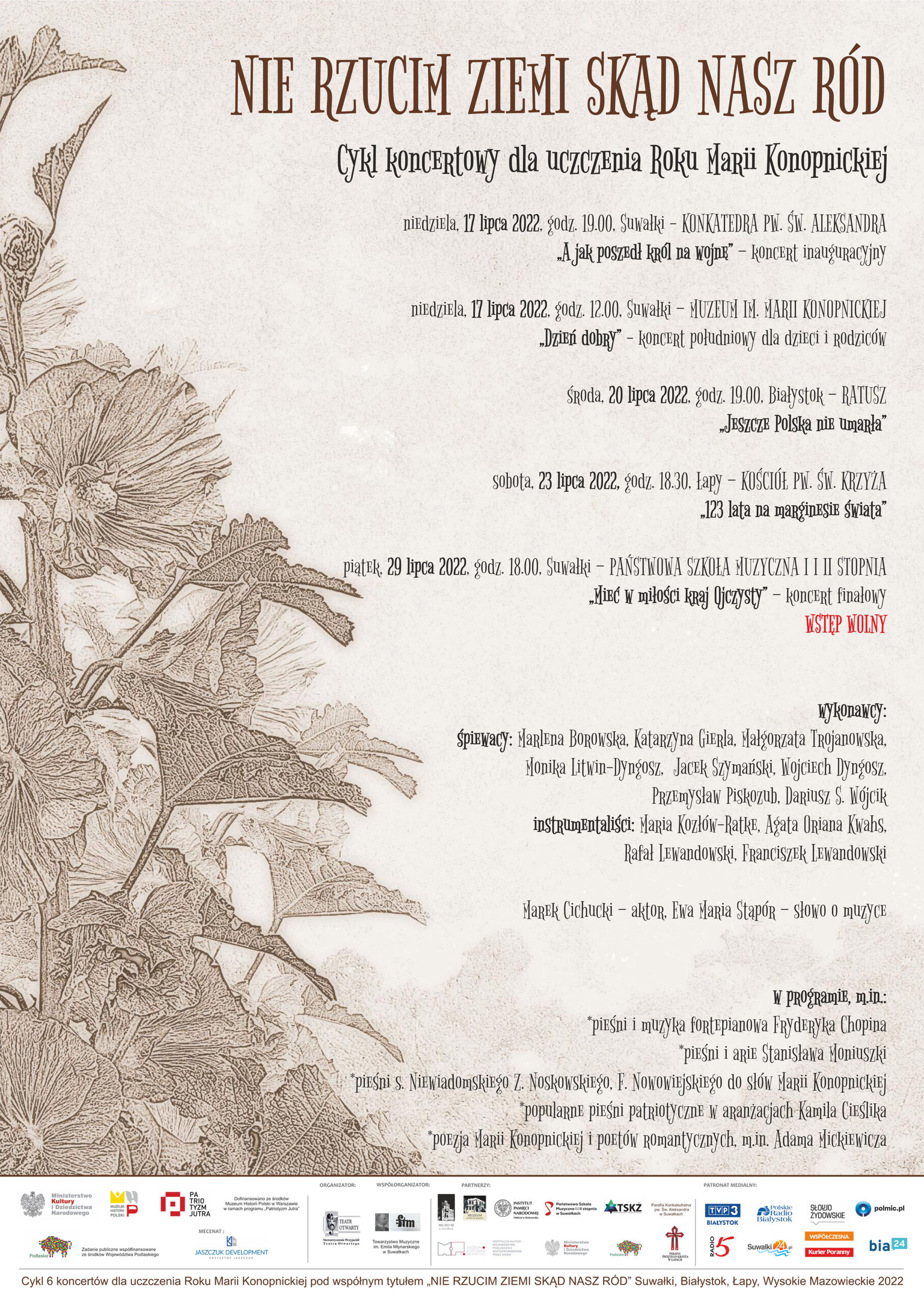