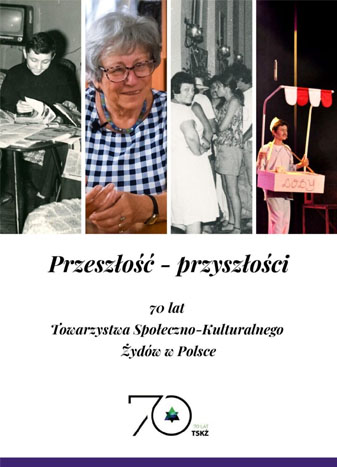 This multimedia project allows the audience to become familiar not only with TSKŻ’s 70 years’ long history, but also to:

✔visit Jewish settlements in Poronin, Jagniątków and Śródborów
✔ join the “Heirs to the Throne” party
✔ visit youth clubs
✔ attend concerts and plays organised by TSKŻ over the past years

The e-book has been authored by Hanna Dzielińska (Hanka Warszawianka) – a journalist and Warsaw-city expert, who recollects her work as follows:

“As I have already cooperated with TSKŻ for some years, I think that I am quite familiar with their history. But when I started working on the book commemorating their 70th anniversary, it turned out that… it was not so. August and September of that bizarre year 2020 were the time of my fascinating interviews with TSKŻ members spread across the country. Each interview opened a brand new page in the history book, casting a new light upon seemingly well-known events. The post-war Poland viewed from the point of view of individual stories of Polish Jews, majority of whom remained in Poland after 1968, is yet a pretty unexplored theme, which I consider as really captivating! The topic is definitely worth exploring, as long as the people who could share their stories with us are still alive…”

Our e-book is much more than just a collection of essays – thanks to extensive multimedia material incorporated into the work the viewer may explore the history  of TSKŻ and post-war Jewish community in Poland for many hours.